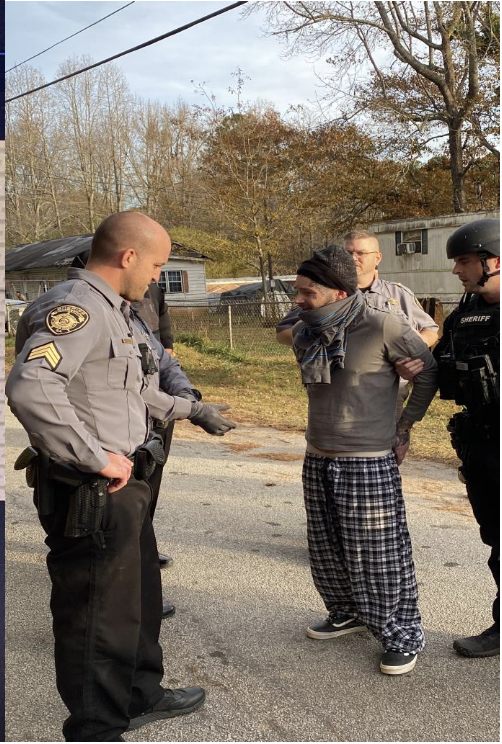 Update:  Bryan Lee Grantham has been captured. Rockdqle County Sheriff’s deputies arrested Grantham without incident or injury at a local residence around  4:25 p.m. on Saturday, Nov. 27, Sheriff Eric Levett announced shortly after issuing an alert to the public that  Granthan had escaped during an early morning work detail at the Rockdale County Jail.

ROCKDALE COUNTY, GA –Authorities are searching the public to be alert after an inmate escaped before daybreak today (Nov. 27) from the Rockdale County Jail.

The Rockdale County Sheriff’s Office said Bryan Lee Grantham, 35, of Conyers should be considered dangerous. Grantham is described as white, approximately 5’5”, 150lbs with sandy blonde hair and hazel eyes. He was last seen wearing a green and white “Rockdale County Inmate” striped jumpsuit with black Vans sneakers. Grantham is covered with face and body tattoos. He has a tattoo across his forehead that says “Damaged.”

Authorities said the escape happened early this morning. At approximately 4:15 a.m., the Rockdale County Sheriff’s Office kitchen staff was preparing breakfast. Inmate worker Grantham was assisting the kitchen staff with breakfast. At 4:50 a.m., an inmate count was conducted of all inmate workers and was alerted that Inmate Grantham was unaccounted for. A search of the facility and area cameras were conducted and observed Inmate Grantham exiting the secure area at approximately 4:27am.

A black pickup truck, possibly a Ford Ranger or a Toyota Tundra, was observed near the Rockdale County Sheriff’s Office at the time of Grantham escape, authorities said in  a news release.

Grantham was being held at the Rockdale County Jail on violation of probation and failure to appear charges.

Any escapee, regardless of charges, should be considered dangerous, the news releases stated. If spotted, do not approach, and dial 911 immediately. Anyone who aids, abets or is found to be harboring Bryan Gratham will be charged with aiding or abetting a fugitive, authorities stated.

The Rockdale County Sheriff’s Office is asking residents and local businesses in the area to lock their doors and stay vigilant. Grantham is very familiar with the Conyers area.

Anyone with information, or knows Bryan Lee Grantham whereabouts is urged to contact Lt. Coggins at 470-464-0649.