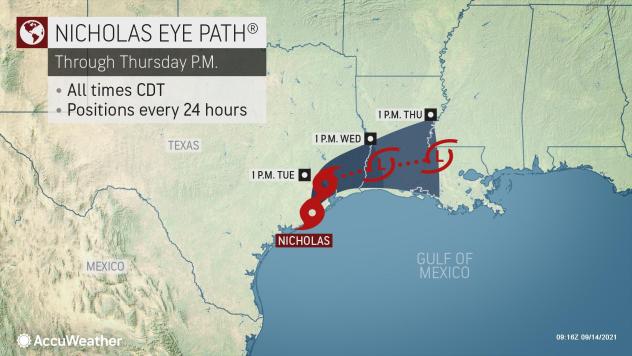 Nicholas made landfall as a hurricane, packing 75-mph winds, on the coast of Texas on Monday night, and AccuWeather forecasters say the slow-moving storm will unleash life-threatening flooding along the Texas Gulf Coast, around the greater Houston area and across parts of Louisiana. Due to the significant threat of flooding the storm will pose, Nicholas has been rated a 1 on the AccuWeather RealImpact™ Scale.

Since making landfall Monday night, Nicholas has lost some wind intensity and was designated a tropical storm as of Tuesday morning. Regardless of the change in designation, forecasters say Nicholas will be able to unload a deluge of rain along the Gulf Coast this week.

As of 7 a.m. CDT Tuesday, Nicholas was located about 15 miles south-southwest of Houston, Texas. The storm had maximum sustained winds of 60 mph, down 10 mph from just three hours earlier, and was moving to the north-northeast at a speed of 8 mph.

The storm crashed onshore in the Lone Star state after behaving erratically while moving northward offshore of Texas on Monday. The storm’s center re-formed several times throughout the day. Nicholas is expected to follow a curved path that will take the system northeastward across the upper Texas coast and into western Louisiana on Tuesday.

The greatest risk to lives and property will be from flooding rainfall. With the forecast track of Nicholas, the heaviest rain will end up over a broad area to the north and northeast of the center of the storm and that includes a large portion of southeastern Texas and part of Louisiana.

Even though steady forward movement is predicted from Nicholas Tuesday, the slow-motion of the storm will funnel a tremendous amount of moisture in from the Gulf of Mexico and produce torrential rainfall along and inland from the coast, including the Interstate 10 corridor from Beaumont, Texas, to Lake Charles, Lafayette and Baton Rouge, Louisiana. Rain heavy enough to trigger flooding is forecast to reach the New Orleans area and Gulfport, Mississippi, through Tuesday night.

A general 8-12 inches of rain with an AccuWeather Local StormMax™ of 24 inches is forecast from the upper Texas coast through much of southern Louisiana. This amount of rain will lead to widespread flash flooding, as well as significant flooding of rivers and bayous.