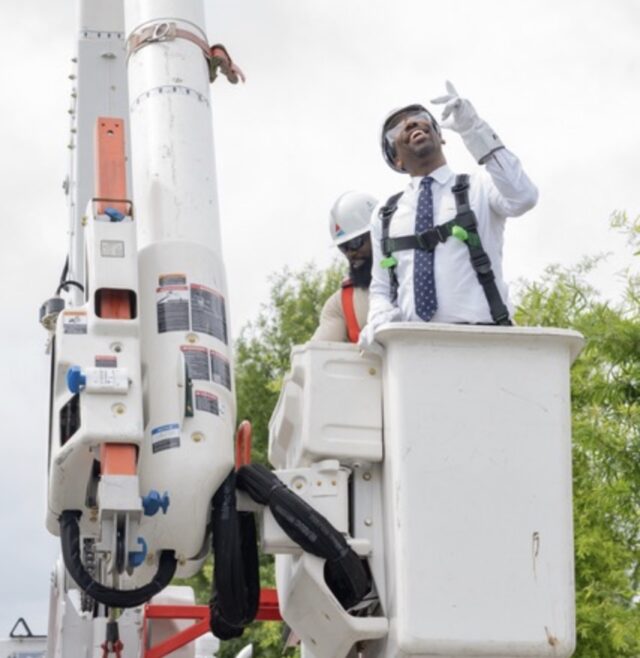 Dickens went up in a Georgia Power bucket truck to assist in replacing an inoperable light with a new LED model. Earlier this week, the mayor received special training required by all Georgia Power installation and repair crews.

The replacement completed today is just one of nearly 3,000 streetlights installed, repaired or upgraded to date as part of the “Light Up the Night” project – a unique partnership between Georgia Power and the City first announced in June 2021 to increase the City’s street lighting footprint by 10,000 energy-efficient LED lights.

In addition, the Atlanta City Council recently approved the sale of all city-owned streetlights to Georgia Power for future maintenance and repair. This builds upon the “Light Up the Night” partnership and includes an additional 9,000 streetlights throughout the city, officials said. Georgia Power will begin work immediately by first repairing inoperable lights, and then upgrading all lights to LED technology over the next 18 months.

Officials said this holistic effort will improve safety and visibility and reduce crime and traffic crashes in Atlanta’s high-need areas. In addition, the upgraded LED lights will significantly reduce the City’s energy usage and lower its annual carbon footprint by approximately 2,000 tons.

“The ‘Light Up the Night’ initiative is a central piece of my administration’s plans to Move Atlanta Forward,” said Mayor Dickens. “Today, we assisted with one of the 10,000 installations and replacements, and expect substantial completion of the entire project by the end of this year. We look forward to the reduced crime, crashes, and carbon usage this effort will bring to the City of Atlanta.”

The City Council-approved purchase agreement and “Light Up the Night” initiative follows a streetlight inventory and assessment conducted by the Atlanta Department of Transportation (ATLDOT) and a team of industrial engineering students at the Georgia Institute of Technology (Georgia Tech). The audit:

ATLDOT Commissioner Josh Rowan said the “Light Up the Night” project is proceeding well, with lights already installed or upgraded in seven high-need neighborhoods prioritized in the streetlight assessment:

Streetlight installations and replacements continue in other high-crime, high-crash areas of the City based on Georgia Power’s implementation plan, and as quickly as possible based on available supply of street lights and necessary equipment.

“We are excited to expand our longstanding partnership with the City of Atlanta and continue our support of the ‘Light Up the Night’ initiative, which is already clearly visible on roadways throughout Atlanta,” said Chris Womack, chairman, president, and CEO of Georgia Power. “This program is a direct investment in our capital city that will help further sustainability for the City while enhancing the quality of life for millions of residents and visitors and, as our employees work and live in these areas and travel these streets too, there is real pride in this project across Georgia Power.”

Photo provided by City of Atlanta.