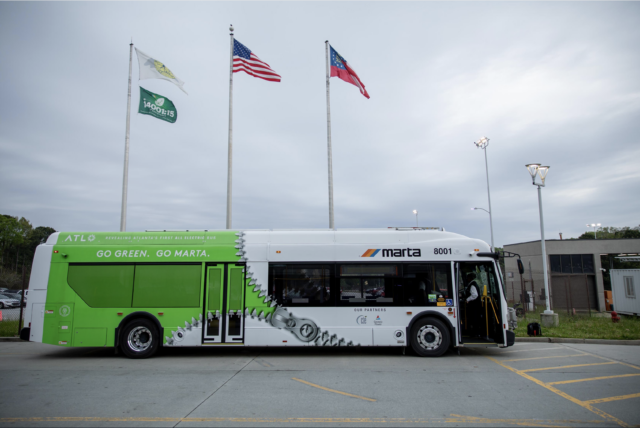 Service begins on May 1

ATLANTA – MARTA celebrated Earth Day on Friday, April 22, by announcing the launch of its first electric buses. MARTA, with support from the Federal Transit Administration (FTA), and partners New Flyer, Siemens, and the Center for Transportation and the Environment (CTE), will place three electric buses into service on Routes 2 and 102 beginning Sunday, May 1.

Routes 2 and 102 run out of North Avenue station, and together provide service to the Ponce de Leon Avenue corridor between Midtown and the Poncey-Highland neighborhood while connecting to Ponce City Market and the Beltline eastside trail. At the eastern end of the route, the 102 turns south to the Edgewood retail district, ending at Edgewood/Candler Park Station, and the 2 continues east on Ponce de Leon Avenue to East Lake Station.

“Electric buses are ideal for routes that travel through dense urban corridors like the 2 and 102 – leaving no noise or emissions in their wake,” said MARTA Interim General Manager and CEO Collie Greenwood. “Our goal is to continue adding electric buses to the fleet to help combat climate change and reduce the public health impacts from air pollution, especially in our most vulnerable populations. The launch of our first electric buses is the perfect way to celebrate Earth Day and all of MARTA’s sustainability efforts.”

“DeKalb is proud that MARTA’s new electric buses will operate out of the company’s Laredo Bus Operations and Maintenance Facility, located in DeKalb County. This facility has one of the largest arrays of solar panels in the state,” said DeKalb County CEO Michael Thurmond. “We wholeheartedly support sustainability and we are delighted that the first route for these buses will be a DeKalb County/City of Atlanta route.”

In 2019, MARTA was awarded a $2.6 million FTA Low/No Emission Bus Grant to support the purchase of six electric buses and charging infrastructure. The buses replace 2005 diesel buses and will reduce MARTA’s fleet emissions by approximately 935 short tons of greenhouse gases, while also reducing harmful fine particle matter that is linked to a variety of health issues.

“I have dedicated much of my life as a public servant to the issue of clean, renewable energy, believing that solar, natural gas, and electric are the smartest and most sustainable sources of power and the only way forward for Georgia,” said Georgia Public Service Commissioner Tim Echols. “I am thrilled that MARTA is leading the way by putting electric buses on the street and envision a day when diesel buses are a thing of the past.”

Recently, Sen. Jon Ossoff, with support from Sen. Raphael Warnock, secured $3.8 million in Congressionally Directed Spending to support the purchase of an additional six buses, bringing the total electric fleet to 12. And MARTA plans to continue transitioning to electric by seeking additional funding made available as part of the Bipartisan Infrastructure Law such as for Clayton Southlake Bus Rapid Transit (BRT). That project will use ten electric buses to provide high-capacity transit service from College Park rail station to key destinations in Clayton County. Electric buses will also be used on Atlanta’s first BRT route along Summerhill Road to connect the Beltline, Peoplestown, Summerhill, Capitol Gateway and South Downtown.

MARTA’s remaining bus fleet is made up mostly of Compressed Natural Gas (CNG) buses that contribute to the Authority’s shrinking carbon footprint, reducing emissions the equivalent of keeping over 370,000 cars off the road or powering almost 300,000 homes for one year.

Last year, MARTA was awarded the American Public Transportation Association (APTA) Gold Level for its Sustainability Commitment Program, recognizing the Authority’s ongoing commitment to sustainability initiatives that have a positive impact on the environment and the communities it serves. Through the incorporation of sustainability efforts in four categories (Buildings, Environment, Community, and Climate), MARTA reduced water use by 40 percent, greenhouse gas emissions by 27 percent, energy use by 14 percent, and waste by 13 percent, over a seven-year period. Learn more about MARTA’s sustainability efforts here MARTA (itsmarta.com).