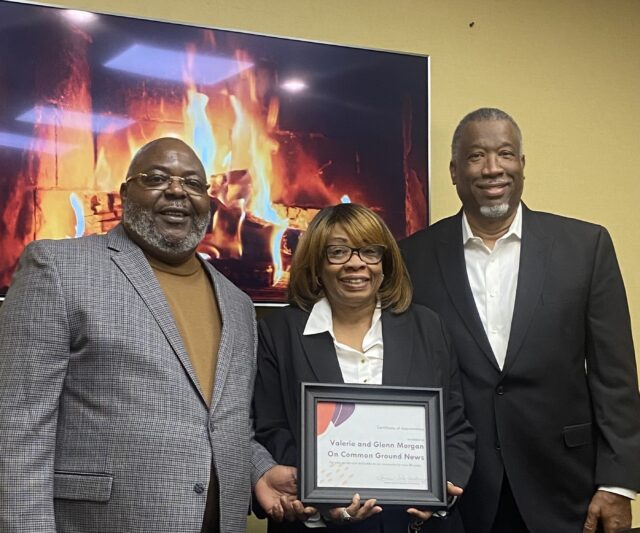 The Greater Lithonia Chamber of Commerce (GLCC) honored On Common Ground News(ocgnews.com) Publishers Glenn and Valerie Morgan at its Morning Mix and Mingle on Dec. 1.

The event, which was held at the Holiday Inn Express & Suites in the city of Stonecrest, was hosted by the Peachtree State Federal Credit Union’s Decatur branch.

On Common Ground News’ was recognized for its dedication and over 26 years of service in the community. On Common Ground News has been a supporter of the Greater Lithonia Chamber for 20 years. The Morgans have served on the Chamber’s board of directors and held other leadership roles with the business organization.

Glenn Morgan thanked the Chamber for the award, noting the GLCC’s vital role in keeping businesses and professionals informed of available resources, legislation and opportunities to network and grow.

Eric Hubbard, who attended the meeting on behalf of Congressman Hank Johnson, announced that the Congressman’s Office is accepting applications during December for paid student interns ages 18 and over. Students will have an opportunity to earn and learn about the work that goes on in the Fourth Congressional District. More details to come.

The Chamber announced plans to host an in-person luncheon for members and guests on Dec. 15. Details will be forthcoming.