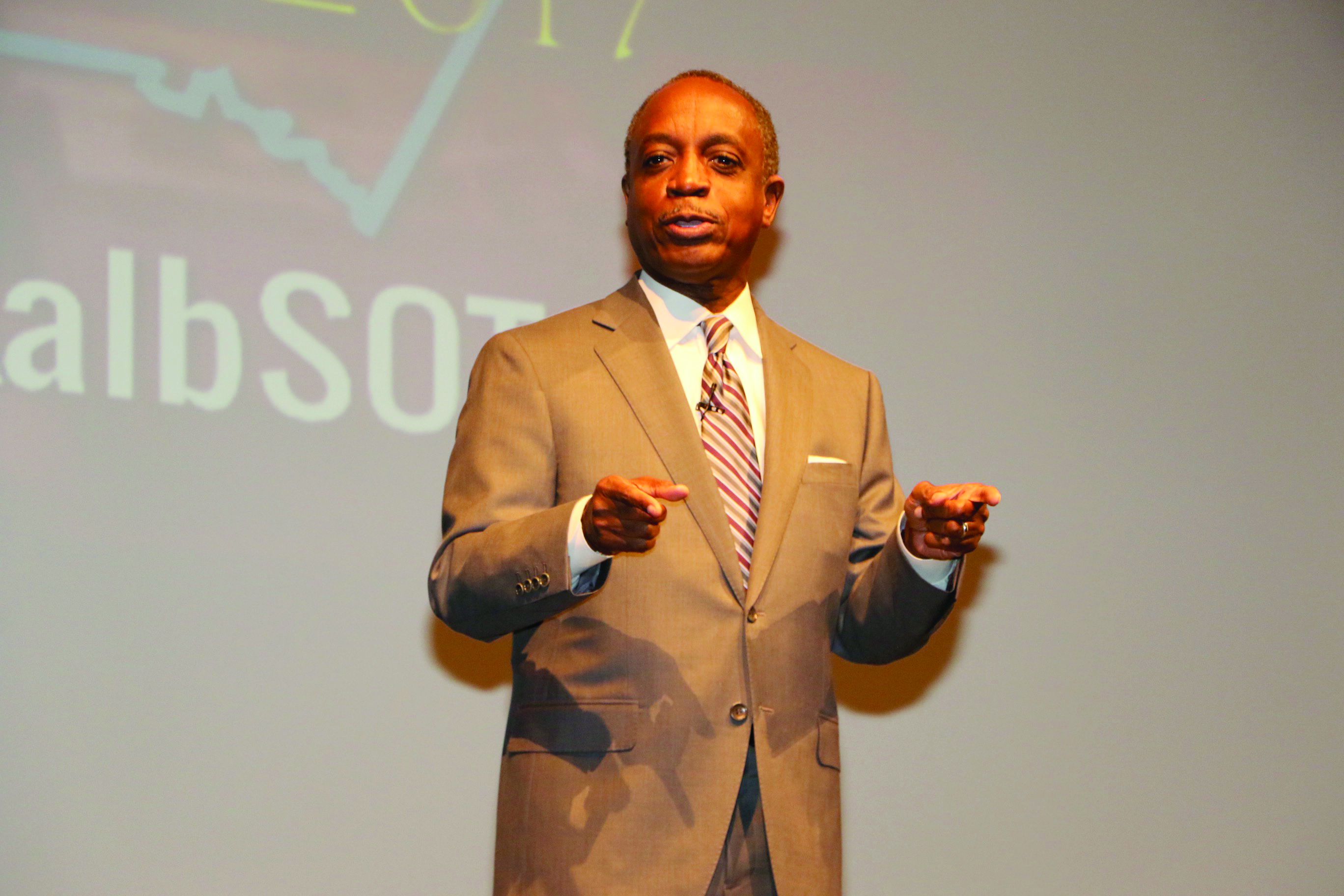 DECATUR—They applauded him more than 25 times, often erupting into laughter and chorusing “Amen” at his candor. It was DeKalb County’s CEO Michael Thurmond’s first State of the County address and with encouragement from the audience, he ditched his prepared “political speech” and instead spoke from his heart.

Thurmond’s address on April 4 came on the 49th anniversary of the assassination of Dr. Martin Luther King, Jr. and he paid homage to the civil rights leader and other foot soldiers, thanking them for tearing down the walls of discrimination.

In his address, Thurmond, 64, discussed growing up in the rural South, the descendant of sharecroppers, to underscore his upbringing as a hard worker and his determination and commitment to fixing DeKalb’s water billing crisis—his No. 1 priority during his first 90 days in office. Thurmond acknowledged the county has been flooded with complaints about inaccurate high water bills, the result of faulty meters, inefficient software, improper readings and other human error.

“For the last 90 days, all—most—of what I’ve dealt with are water meters, trash and sewage,” said Thurmond, dispelling the notion that being CEO is a high profile job removed from the grit and grunt work.

Thurmond said, however, he is certain that DeKalb can and will fix the problem.

“Let me tell you how I know we can fix it: Because there are cities and counties all over America—all over the world—that have figured out how to send out accurate water bills,” said Thurmond, adding DeKalb doesn’t need to reinvent the wheel; it only needs to reach out to experts who already have the knowledge.

“We’re going to fix this issue. Because you as citizens have every right to expect accurate water bills,” Thurmond said.

The leader of Georgia’s fourth-largest county, comprised of 735,000 residents, apologized for not delivering his prepared script on April 4 at the Porter Sanford Performing Arts Center in Decatur. Just a week earlier, Thurmond delivered his State of the County address to business leaders. But he didn’t need to apologize. Constituents who attended his evening address appreciated what he told them during his 32-minute talk, which drew applause after applause after applause as discussed his motivation for fixing DeKalb’s problems. He said he who grew up in a family of 11 with no plumbing.

“It was so bad we were jealous of the folks who lived in the projects because at least they had indoor bathrooms,” Thurmond quipped.

Thurmond said he has not only focused on fixing the county’s water billing crisis during his first 90 days, but also cleaning up litter—especially in South DeKalb. He said his administration can’t do it alone, though and he made a plea for residents to pitch in and do their part.

“I need your help. I need you to recruit your neighbors and just do your neighborhood. We’ll do the heavy lifting,” said Thurmond.

Thurmond also called on the community to help address his third priority: putting young people to work this summer through a DeKalb Workforce Development program, which is paying $9 an hour to youths who are hired by private employers, nonprofits and churches. He said all employers need to do is provide placement for the youths. The program pays the salaries.

“The drug dealers and the pimps shouldn’t be the only ones recruiting our children,” said Thurmond.

Thurmond closed his State of the County address by taking questions from the audience.

Thurmond said in a news release he would give an update on the water billing issue on Tuesday, April 11, 6:30 p.m., at the Maloof Auditorium 1300 Commerce Drive, Decatur. He canceled the April 5 community update because of inclement weather. The rescheduled meeting will be the first of three 30-day progress reports on Thurmond’s “New Day Project” to correct the problems of inaccurate billing.

Thurmond said approximately 8,000 DeKalb water and sewer customers, who have had their bills held because of unverified billing data, will begin receiving regularly scheduled bills beginning the week of April 10.

“With the support of the DeKalb County Board of Commissioners, we have developed a short- and long-term strategy to restore trust and integrity to the water billing system,” Thurmond said. “The root causes of the water billing problem include inadequate planning, staffing and training, as well as inefficient billing software, defective water meters and insufficient communication.”

Beginning the week of April 10, affected customers will begin receiving their January and February monthly and bimonthly bills. These will include a letter from CEO Thurmond detailing some of the causes for the delayed bills and recent corrective actions. A copy of the letter is attached.

Held bills will not be assessed late fees or other penalties for late payment. Extended payment terms only will be available for the held bills. Any balance that was due prior to September 2016 will still be due and will carry forward on the January/February bill.

DeKalb County has a total of 194,000 water and sewer customers. In September 2016, approximately 37,000 accounts could not be independently verified as being accurate.

On Feb. 28, the DeKalb County Board of Commissioners approved CEO Thurmond’s recommendation to fund the New Day Project.

Customers needing an extension to pay their bills should contact the Utility Customer Operations Center at 774 Jordan Lane in Decatur, or call (404) 378-4475 to speak with a customer service representative. For more information, visit www.dekalbcountyga.gov/waterbilling.