Brown, Spaulding lead Miller Grove to 34-27 upset of No. 7 Stephenson 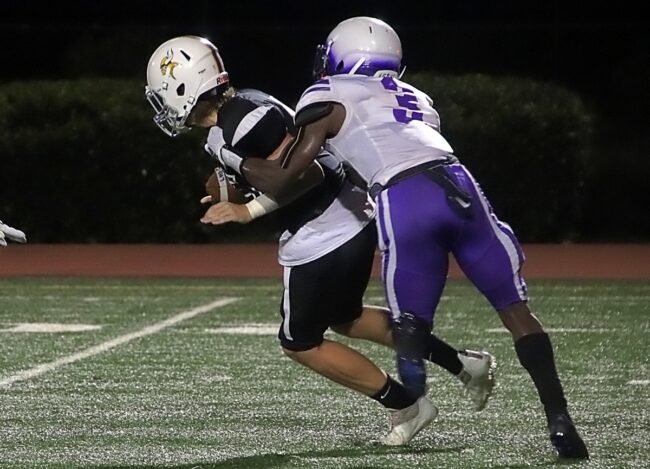 DEKALB COUNTY, GA—Senior running back Jayden Brown and junior linebacker Cayman Spaulding wreaked havoc on the Class 4A No. 7 ranked Stephenson Jaguars to lead the Miller Grove Wolverines to a 34-27 Region 6-4A victory at Hallford Stadium on Friday (Oct. 8).

Brown finished the night with 205 yards rushing and two touchdowns on 22 carries and added a 67-yard punt return. Spaulding had 13 total tackles (7 solo, 6 assists) including six tackles for a loss to go with two interceptions, one for a touchdown.

Stephenson (5-1, 1-1) answered on the kickoff as Cordell Andrews returned the kick 84 yards for a score and followed up on the receiving end of a Marte Barton 20-yard touchdown pass as the Jaguars took the lead 14-7 with 7:05 left in the first quarter.

Miller Grove sent the teams to the half tied at 14 as Jakobe Presley returned a partially blocked punt 27-yards for a touchdown with 4:33 left in the second period.

Miller Grove defensive lineman Kevin Nash recovered a Stephenson bumble at the Jaguars 25 to set up Brown’s third touchdown. The Wolverines were in a fourth and goal situation at the Stephenson one-yard line when Brown cut inside on the left side to push the lead to 28-14.

Spaulding got into the act with his 47-yard interception return as the lead ballooned to 34-14.

The Jaguars did not quit and Devin Ingram took a Barton pass 45 yards for a touchdown with 9:09 to play to cut the lead to 34-21. Spaulding answered with his second interception of the night only to have Stephenson get the ball back on a fumble recovery.

Barton hit Rahim Diarrassouba for a 43-yard completion to the Miller Grove three-yard line. The Wolverines forced a fourth and goal from the one. Barton again found Diarrassouba, this time in the right corner of the end zone with two defenders covering. Diarrassouba came down with the catch and the lead was down to 34-27 with 4:19 to play.

Stephenson forced a Miller Grove turnover on downs with 42 seconds to play and took over at its own 35. The Jaguars got into Miller Grove territory, but a final heave into the end zone was batted down by a group of Wolverine defenders to preserve the win.

Miller Grove gets this week off before hosting Mays in a big Region 6-4A match up Octo. 22 for homecoming at Avondale Stadium. Stephenson heads to Atlanta to take on Mays in another key Region 6-4A meeting on Oct. 15 at 8 p.m.

A battle of Top 10 ranked teams in Valdosta had the Class 7A No. 7 ranked  Lowndes Vikings scoring with less than a minute to play to knock off the Class 3A No. 1 ranked Cedar Grove Saints 45-38 on Oct. 8.

Rashod Dubinion rushed for 238 yards and two touchdowns on 25 carries to lead the Saints while Janiran Bonner had four receptions for 88 yards and a touchdown and threw a 34-yard touchdown pass to Trevon Ferrell (2 receptions, 77 yards)

Jamar Graham was 14 of 18 passing for 173 yards and two touchdowns for the Saints. Bernard Mack added three receptions for 42 yards and a touchdown.

James Carswell and Isaiah Scott both had a pair of touchdown runs to lead the Southwest DeKalb Panthers to a 52-0 homecoming victory over the Martin Luther King Jr. Lions on Oct. 9 at Godfrey Stadium.

Carswell had runs of 11 and 31 yards for scores in the first half and Scott picked up touchdowns on runs of five and nine yards in the second half. Billy Johnson also added a touchdown run to go with a Sadir Ryan 33-yard touchdown pass to Brandon Powell.

Mark Brock is the Athletics Specialist for the DeKalb County School District.