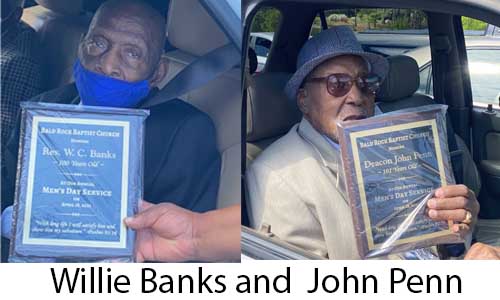 The Rev. Willie Clarence Banks, 100, and Deacon John Henry Penn, 101, were honored during Bald Rock’s drive-in Men’s Day worship service, marking a page in the history of Bald Rock, Rockdale’s first African American congregation, which was established in 1861. The church held the service on the front lawn with members and visitors worshipping in their cars with masks on and following COVID-19 social distancing guidelines.

Brian Jenkins, president of the Rockdale County branch NAACP, saluted the men, praising their contributions to the church, community and humanity. Jenkins thanked the church for honoring Banks and Penn.

State Sen. Tonya P. Anderson attended the service and presented resolutions congratulating Banks and Penn on their milestone birthdays and contributions to the community. Anderson said that both centenarians would receive Outstanding Citizens awards from the state of Georgia.