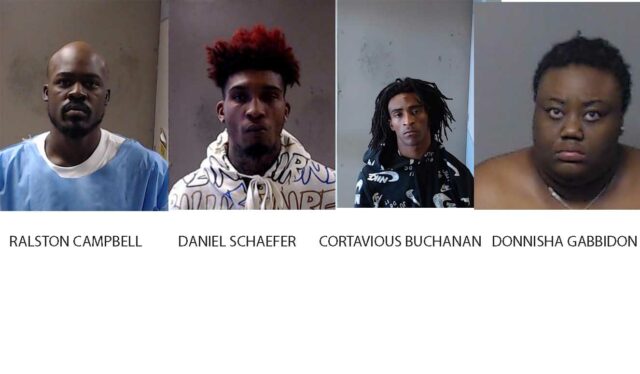 DEKALB COUNTY, GA– In a continuation of its “Eyes in the Sky” operation, the DeKalb County Sheriff’s Office has arrested four persons, including two individuals already in custody on charges of attempting to provide contraband to DeKalb County Jail inmates.

“Drive-up and you’re getting locked up,” said Chief Deputy Randy Akies. “They want to drive or walk up to the jail, commit a crime, and leave. You will be arrested and housed with the intended inmates with consequences. Apparently, they don’t realize we’re smarter than the average criminal, and they’re not good at this.”

Chief Akies said the suspects allegedly plot the contraband drop during unauthorized contacts with inmates who are involved in the illegal process that began earlier this year and also resulted in arrests.

Deputies from the Jail Emergency Service Team and investigators from the Field Operations Fugitive Unit made the arrests on May 15, following a brief foot chase of the suspects at Memorial Drive and Camp Drive in Decatur during the contraband drop attempt. Sheriff’s Office surveillance shows the incident in progress.

The following were arrested and taken into custody on May 15:

Already in custody at the time of the incident were two other suspects: Cortavious De’mon Buchanan,v20, of Decatur, who is being held without bond on a series of unrelated charges since his arrest in September 2021, and Daniel Schaefer, 26,  of Decatur, who remains jailed following an arrest in December 2020 on unrelated charges. Additional charges of Conspiracy to Commit a Felony (Felony) are being brought against Buchanan and Schaefer.

The agency’s “Eyes in the Sky” operation targets individuals who place contraband inside of bags that have been lowered to the jail grounds from cell windows broken by inmates. Inmates inside the cell retrieve the bags and the contraband.

“Contraband inside the jail poses a threat to everyone in the facility, and it compounds the situation for inmates who might otherwise have been on their way to being released,” said Chief Akies.